We invite you to
participate.

The Sarcoma Academy Forum invites you to connect and participate within the following fields:

We are convinced that sharing knowledge and experiences within the sarcoma community will lead to an overall knowledge gain. While keeping a close eye on data security, our Sarcoma Academy Forum allows to share the most interesting, complex sarcoma cases among experts and colleagues.

Our Multidisciplinary Sarcoma Case Discussion Forum meets online every 2 to 3 months to discuss challenging cases covering all sarcoma disciplines from all over the world. You can post cases any time, thus getting access to expert opinions. Registration is free of charge. 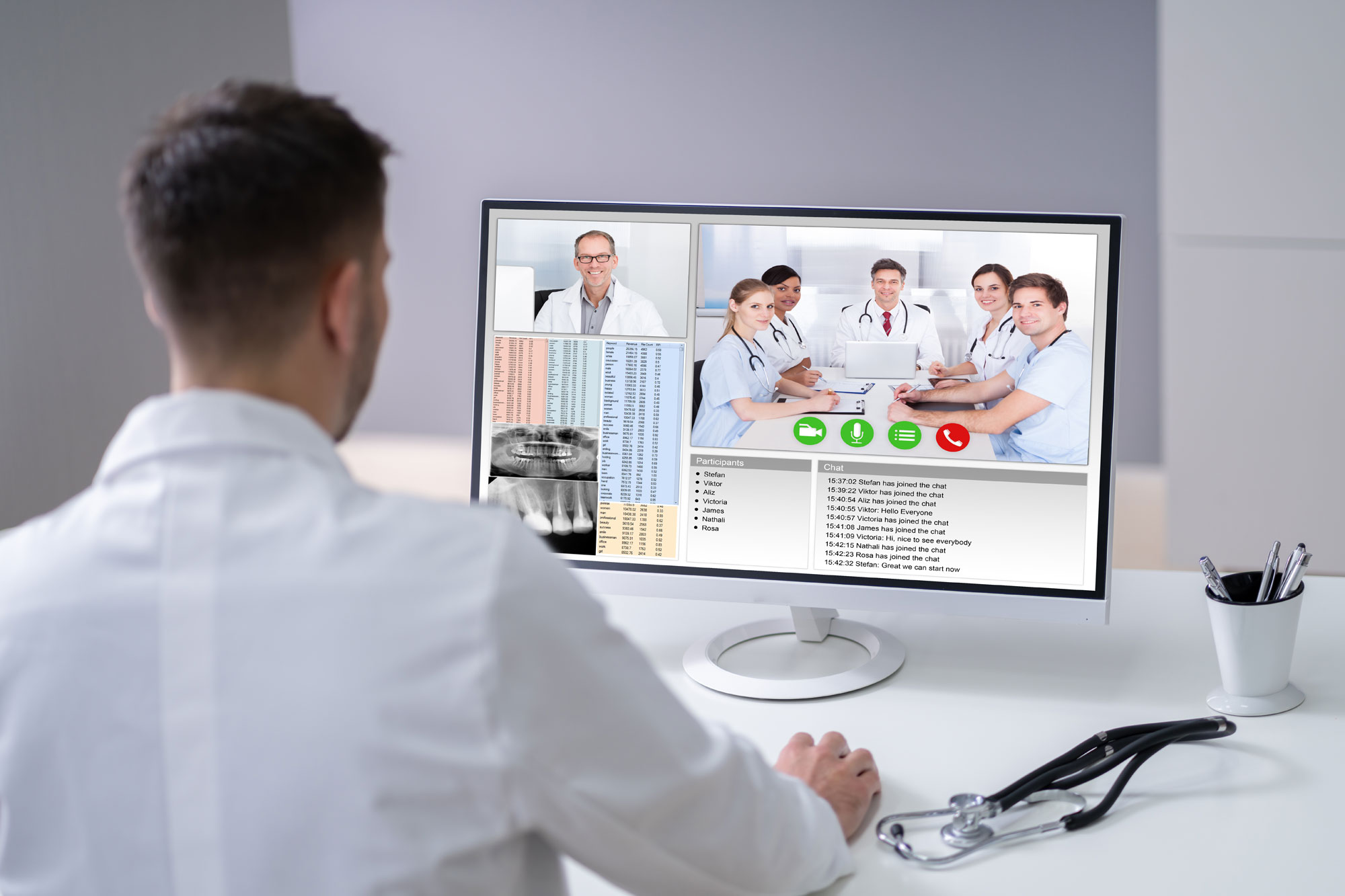 Join and discuss cases with other experts - worldwide.

Have you missed one of our case discussion or would like to watch it again? Please register and login to our forum.

Gundhild Mechtersheimer, Heidelberg, GERMANY
A 27 yo nulligravida presents with abnormal uterine bleeding. A polypoid mass of maximal 15mm diameter was incompletely excised on colposcopy. IHC and Archer NGS revealed NTRK3 rearranged spindle cell sarcoma of the cervix utteri. Staging CT was negative. A modified radical hysterectomy was carried out containing remains of 25mm of the sarcoma. 3 months postoepratively, there were no signs of local nor systemic disease. Detailed current pathological background knowledge on NTRK1/2/3 kinase fusions is discussed.

Norbert Dion, Quebec, CANADA
A 69yo physician presented with a pathological fracture of the right proximal femur contaminating the entire hip joint. A CT-guided biopsy was suggestive of chondrosarcoma, staging studies were negative. Surgical options are presented and discussed. A periacetabular extra-articualr Ganz-OT/ type II internal hemipelvectomy was performed with negative margins. Reconstruction was carried out with an allograft-prosthetic composite (APC). At 11 months postoperatively, the patient was free of dissease and walks without crutches and without limping.

Andrew Bishop, Houston, USA
A 32yo male prsented with a 20cm large spindle cell sarcoma of the lateral inferior pelvis extending through the sciatic notch. In addition, a chondrogenic supraacetabular lesion was biopsied revealing a high-grade chondrogenic malignancy; further staging was negative. The patient received 6 cycles of AI chemotherapy followed by preoperative radiation for the main mass and SBRT for the supraacetabular mass, before undergoing type III internal hemipelvectomy. At 18 months postoperatively, the patient was ambulatory with gait adaptations, but the right supraacetabular chondrosarcoma increased in size. Another biopsy confirmed G2 chondrosarcoma, and cryoablation was performed. At 4 months of follow-up, the patient was free of disease.

Emanuela Palmerini, Bologna, ITALY
A 33 yo male presents with an aggressive lytic lesion of the right calcaneus, extending into the surrounding soft tissues. Work-up revealed a high-grade spindle cell sarcoma of bone with a EML4-NTRK3 rearrangement. MAP neoadjuvant chemotherapy was initiated. Because of an important local tumor progression, neoadjuvant second line larotrectinib was initiated. After good response, the tumor was locally resected. No adjuvant therapy was used.

Bob Esther, North Carolina, USA
A 6yo girl presented with left shoulder pain and a mass which on biopsy revealed an osteosarcoma. On imaging, an excellent response on neoadjuvant chemotherapy of the extra-articular mass was noticed. Surgical options such as amputation, endoprosthetic growing prosthesis, allograft, free fibula and combinaitons thereof were discussed. A free vascularized epiphyseal proximal fibula transfer based on the tibial anterior artery was performed. 18 months postoperatively, the patient fell and fractured the diaphysis of the (neo-)humerus, which healed conservatively and uneventfully.

Gabriela Studer, Lucerne, CANADA
A 50 yo female patient presented with tricompartimental extension of a UPS at the distal left thigh and metastasies to both lungs and inguinal nodes. She received combination therapy for the primary tumor and adjuvant AI chemotherapy, followed by 3 wedge resections of lung nodules in the follow-up. Despite subsequent palliative Pazopanib therapy, tumoral lesions progressed and at 2 years followup, a both intra- and extrapelvic inguinal tumor mass of 14cm mass recurred. This was controlled using hypofractionated radiation therapy (35/25 Gy in 5F). Under subsequent Nivolumab therapy (which isongoing to date), the patient developped both brain metastases of 3cm and a 15 cm mass on the opposite right thigh. All these locations were controlled using 25 Gy/5F. At the last follow-up of 4.5 years, the patient was mobile, had no pain and no tumor at the prmary site, and non-metabolic scar tissues at the other sites. Hypofractionated radiation therapy is being discussed.

Beata Bode, Zurich, SWITZERLAND
Four patients are presented with a deeply seated soft tissue mass in the posterior thigh/buttock region. The MRI of all patients showed well delineated masses with myxoid characteristics, and core biopsies revelaed paucicellular myxoid tissues on HE. The stepwise diagnostic approach is exemplified: In a first next step, immunehistochemistry (IHC) included S100, MUC4, CD34 and Ki67, which then identified one patient being diagnosed with benign intramuscular myxoma. In a second step, molecular studies were conducted including PCR and FISH analyses. These revealed DDTI3-positive fusion-proteins (FUS-DDTI3 and EWSR1-DDTI3) confirming myxoid and myxoid-round-cell liposarcomas. Because for the 4th patient, both IHC and molecular studies were negative, Next Generation Sequencing (NGS) was then performed which detected an AHRR-NCOA2 fusion-transcript, confirming a rare benign angiofibroma of soft tissues.

Philipp Funovics, Vienna, AUSTRIA
Intercalary reconstruction of the femur may include an intercalary prosthesis ("hardware") or combinations of allograft & (non-)vascularized fibula ("biological"). Two patients are presented with each type of reconstruction, and surgical details are highlighted. For one patient, a temporary external fixator for the vascularized fibula was used together with a massive allograft and plating, while the other patient received a short compress prosthesis. Intraoperative details, postoperative imaging as well as after care is contrasted and discussed. Complications included pseudarthrosis of the proximal junction in the first as well as aseptic loosening of the distal fixation in the second patient. Successful management resulted in normal gait function and tumor control.

Veronika Blum, Lucerne, SWITZERLAND
A 47yo female presented with a swelling and pain at her diaphyseal right tibia. Imaging and core biopsy revealed a HEY1-NCOA2 positive mesenchymal chondrosarcoma, which initially was localized. Intercalary R0 resection with allograft-vascularized fibula reconstruction was performed using patient specific cutting guides (PSI). VIDE chemotherapy was rejected by the patient. 14 months postoperatively, the patient developped multiple bone metastases to the lumbar spine, necessitating spondylodesis, but also metastases to ribs, pelvis, both sides of the femur/femoral neck (with prophylactic stabilization on the left side), followed by radiation therapy. Staging revelead widespread metastases. Because VIDE was still no option for the patient, Cabozantinib was elected for systemic oral treatment. At 3 months follow-up, the patient had complete remission.

Jay Wunder, Toronto, CANADA
A 66yo male presents with a history of 2 months of a painfull growing solitary mass in the deep soft tissues of the right upper thigh/groin region involving the neurovascular bundle. Initial core needle biopsy suggested GCT/PVNS. A subsequent incisional biopsy allowed for molecular analytics and an ALK1-gene arrangement was detected. Systemic therapy with Crizotinib was conducted when MRI evidenced a massive decrease of the tumor mass. Subsequently, a preoperative radiation therapy with 25x2=50Gy was performed, followed by margin negative tumor resection and thereby realizing limb-salvage surgery.

Manish Agarwal, Mumbai, INDIA
56yo F with path fracture of the proximal humerus which was initially curetted and fixed with K-wires. Finaly path confirmed fibroblastic OGS. Transarticular wide local resection was performed with THR, followed by 5 cycles of doxo/cp chemotherapy. 9ms postop there were lung opacities and swelling of distal epifascial soft tissues in upper arm. Resection of this mass revealed angiosarcoma. 5ms thereafter, another angiosarcoma mass in upper lateral arm was noticed, followed by multiple recurrencies. Gemcitabine/decotaxel was administered to stabilize the situation.

Jean-Jacques Stelmes, Bellinzona, SWITZERLAND
37yo F presents with a 51mm soft tissue mass on the proximal thigh. Whoops surgery was accompanied by an important postoperative hematoma. Path work-up revealed epithelioid sarcoma. Preoperative radiation was followed by wide local resection including the area of the hematoma.

Ralph Zachariah, Winterthur, SWITZERLAND
48yo M presents with a 7cm soft tissue mass localized in the proximal L triceps, which turned out the be a G2 MFS. Patient underwent combination therapy which provided local control for 14ms when a first recurrence in the ipsilateral axialla was confirmed and again addressed using a combination treatment. 8ms later, a G3 recurrence around the brachial plexus was confirmed by biopsy. Induction chemotherapy with 3 cycles of epirubicine/ifosfamide was initiated.

Prof. Jean-Yves Blay, Lyon, FRANCE
23yo with dyspnea for 2 ms. Imaging revelaed left atrial mass which was R2-resected, and intimal sarcoma was confirmed, without any metastasis. Patient underwent 6 courses of AI with complete remission. Upon MDT discussion, heart transplantation was carried out. 2ms later, multiple brain metastases to the brain were diagnosed. Patient underwent WBRT with partial response, no edema at 5ms follow-up.

Prof. Alessandro Gronchi, Milano, ITALY
18yo with left retroperitoneal mass of 10cm invading L4 turned out to be NTRK rearranged sarcoma. Larotrectinib for 3ms led to an important size reduction of the tumor to render it operable. Compelte surgical resection included aorta and vertebral body. At 3ms follow-up, the patient was disease free and doing fine.

Prof. Axel Le Cesne, Villejuif Cedex, FRANCE
37yo male with a perineal mass of 6cm infiltrating the gluteus maximus muscle was R2-whoops resected. Induction neoadjuvant chemotherapy with 5 cycles of AI was performed with minor response, followed by R0-reresection and local flap reconstruction. Patient showed no RIC. Postoperative radiation therapy was then conducted. At 7 months follow, there was no evidence of disease.

© 2023 by Sarcoma Academy. All rights reserved.